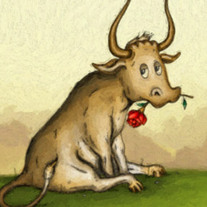 "Even the youngest children will be enchanted by this sweet tale of a Spanish bull that would rather take care of his flowers than fight! The score incorporates a variety of Spanish musical styles, including flamenco guitar, and the pun-filled dialogue includes lots of Spanish vocabulary words. In this fun and imaginative adaptation, including a pig named Cochina who wants to be a star, and a young matador who would rather be a dancer, everyone learns to be true to themselves." (for ages 4+)