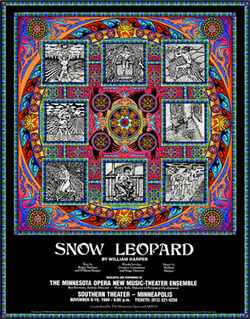 SNOW LEOPARD
"follows the journey of a public servant (the MAN) through his spiritual death and rebirth. The MAN is an American working covertly for the Chinese government to build a dam across the Tsang-Po river in Tibet. He has been working with the Chinese with the full support of the Executive Branch of the United States government in spite of laws passed by the Congress forbidding such cooperation. The opera opens with the MAN opening the floodgates of the dam to activate the turbines. The MAN flys above and beyond the world of physical reality, as if suspended in some kind of lucid dream state. His sensory observations reveal a powerful faith in technology, and the potential good it will bring to this underdeveloped land. A Tibetan Potter, working at his wheel watches the MAN and sees that the MAN is oblivious to the enormous political, cultural and ecological impact that this dam will have on Tibet. The POTTER calls together a group of Tibetan angels to take the MAN on a journey to the center of his soul.

Assuming the identities of key people in his life, the POTTER and his ANGELS systematically strip from the MAN all of the moral and ethical assumptions and structures upon which the MAN has built his individual and cultural identity. His professional and personal relationships founder in betrayal and disappointment and finally the MAN is led to experience his own death.

Finding himself in an underworld, a place of transition between life and death, the MAN fights to be reborn. He must first face himself in the mirror, to re-examine his place in the world, his values, his relationships, and his work. The MAN experiences the psychic stripping away of all he has known and is swept away in the torrents of the collapsing dam. Washing up on some shore he comes face to face with the apparition of the terrifying Black Wing. The Black Wing recedes into the sky and, one by one, the stars of the sky organize themselves into the Snow Leopard constellation.

The POTTER reappears to teach him how to make clay and how to fashion clay into a bowl on a spinning wheel. The MAN takes the bowl from the potter and smashes it to the ground. He then takes his place at the POTTER's wheel and begins to spin a new bowl - he begins to fashion a new life for himself."
©1989 Wiliam Harper and Roger Nieboer