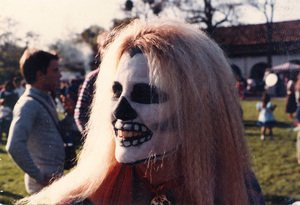 HISTORY
Victoria received her BA in Visual Art from UC Santa Cruz. After graduating, she travelled in Mexico for a year and a half to study the rich mural and indigenous textile arts traditions. She returned to the U.S. to paint the first mural commission at the new Catalyst in Santa Cruz, and went on to collaborate with local artists and Chicano mural collectives as social activists. She also served as an art instructor working with under-served and marginalized youth in the Cultural Enrichment Program of Salinas; as an arts mentor in the migrant camps; and as an art consultant for SPECTRA in Santa Cruz County schools.

Large format, community based mural painting evolved and led her to El Teatro Campesino, where she joined the collective as a scenic artist, and eventually as a stage designer. Finally, the teatro offered her the perfect blend of provocative literature, music, dance, drama, architecture, and visual arts–in a collaborative environment shared with diverse artists and community.

After receiving her MFA in Theatre at UC San Diego, Victoria studied digital media at UC Irvine’s Digital Arts program, and continues to work as a freelance designer. She joined the Theatre & Dance faculty in 2002 at UC San Diego, where she teaches a range of design courses (History of the Transformation of Design in Performance, Digital Rendering, Storyboarding + Concept Art, Costume Rendering, Multimedia, Digital Video Design, Kinetic Design), and is a faculty collaborator in the experimental Technology + performance course, Crossing Boundaries, created by Shahrokh Yadegari. She received the Hellman Fellowship in 2004 to research digital projection design.

She has served as a volunteer at the Helen Woodward Animal Center Where she designed a western town Set for the Equestrian Therapy Program;  And as a Picart Art Consultant at the Carlsbad Boy & Girls Club (See Special Projects-World Peace Mural which toured California), and coordinated a multiethnic hand-printed quilt created by after-school children that was selected by the San Diego Quilt association for display.